Corecut has been singled out for special recognition at a prestigious Stateside awards ceremony following its successful delivery of major tunnel upgrade work in Glasgow.

Corecut completed the £1.25million infrastructural work at Queen Street Station - the largest Diamond Drilling project undertaken in Scotland to date - on budget and ahead of schedule.

The company’s contribution has now been recognised as an industry exemplar and a winner at the fourth annual Concrete Openings Awards, which celebrates innovation and excellence across the industry.

The prestigious gathering was held recently at the Las Vegas Convention Center as part of the World of Concrete trade show.

The panel of judges considered each of the 16 shortlisted jobs based on their pre-planning, use of innovation, degree of difficulty and quality requirements – and Corecut scored highest in the Roads, Bridges & Airports category.

Poster boards featuring Corecut’s Queen Street work were also on display during the awards ceremony and for the remainder of the three-day show. 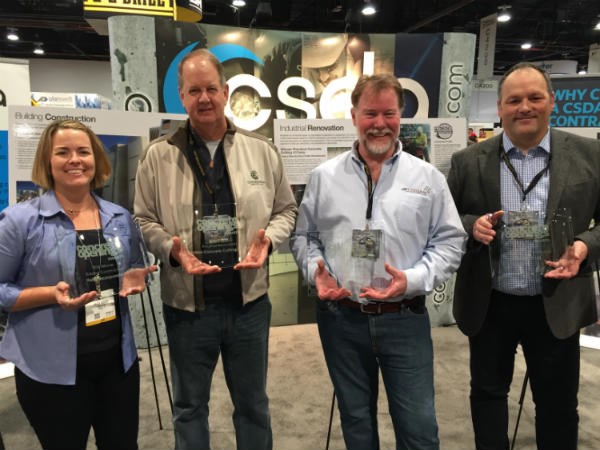 Last year, Corecut – which has offices in Broxburn and Sheffield – took the lead role in the removal of 10,000 tonnes of existing concrete slabs as Queen Street’s tunnel underwent significant improvements.

Known for its work on large-scale construction projects across almost 40 years, Corecut was considered an ideal partner to undertake this highly complex work, including Diamond Drilling and Concrete Floor Sawing in challenging, time-critical tunnel conditions.

Starting in March last year, the company worked around the clock, seven days a week, to remove almost a kilometre-long concrete slab track, before concluding in June – a whole six days ahead of schedule.

Once the tunnel upgrade had fully commenced, Corecut then worked nearly 900 man days on site without a lost time incident.

Managing Director of Corecut, Finlay Crocker said of the new award: “This represents a very pleasing validation of our hard work on the Queen Street Station tunnel upgrade.

“To be recognised on the international stage by leading industry judges is a real testament to the quality and work ethic of our team who toiled 24/7 across almost 100 days in very difficult conditions.

“The awards are nothing less than a gathering of the best in the business, and we were proud to join that elite group of contractors in Nevada.

“The fresh recognition also serves to vindicate our strategy as a business, and we are working hard to replicate that success as we look forward to more significant project wins in 2017.

“Quality, precision, and continuous innovation remain at the heart of every stage of our operation as we look to deliver the best possible solutions.”

A full case study of the project can be viewed here.

Corecut’s recent work has placed it at the very heart of the UK’s transport infrastructure, allowing it to realise key improvements on high-profile jobs throughout the country.

Delivering everything from road and rail to tunnel and bridge projects, the company has helped to keep Britain moving with its recent involvement on the M1 Smart Motorway scheme, the A1 Leeming to Barton improvement works, the M6 and M5 upgrades, and the A5-M1 Link.

In Scotland alone, it has worked on the £500million M8, M73 and M74 upgrade works - including the new Braehead Rail Bridge - the new £1.35bn Forth crossing, the £550million Aberdeen Western Peripheral Route, and the £35million A9 Dualling Programme.