Corecut’s recent work has put them at the centre of Scotland’s transport infrastructure, delivering key services on high profile jobs throughout the country. Whether you travel on rail or road, through tunnels or over bridges, Corecut have been providing invaluable skills and services to large scale construction projects to keep Scotland’s transport infrastructure moving.

Due to be completed in early 2017, the upgrade work on the M8 M73 M74 is set to improve the connections between the country’s main commercial centres, providing strong benefit to the economy and improving journey times and capacity.

Corecut played an integral part in these improvements, working on the new Braehead Rail Bridge. This 2,000 ton structure will carry the Glasgow to Edinburgh Rail line over the new road. Corecut were subcontracted by Ferrovial Lagan JV to remove excess concrete from the pile heads upon completion of the piling process. Corecut utilised a number of specialties, combing Diamond Drilling with Hydraulic Bursting in order to remove the concrete efficiently and safely within the confined space of the Network Rail Property. 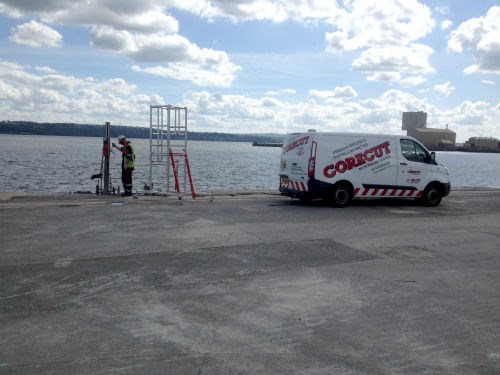 Corecut have continued working on the rail infrastructure, and have been employed to work on the Queen Street Station improvements in Glasgow. This station is the third busiest in the country, handling approximately 20 million passengers a year, acting as the gateway to the North and East of Scotland.  Corecut have deployed their skills in Diamond Drilling and Concrete Floor Sawing to provide key support in the construction process, removing almost a kilometre concrete slab track.

Outside of the Glasgow area, Corecut have been involved in work on one of Scotland’s highest profile construction projects – the new Forth crossing.  This project required multiple techniques including Diamond Drilling, Controlled Demolition, Wall Sawing and Hydrodemolition with work taking us to each extreme of the structure, working on the top of the towers as well as the North and South sides of the crossing. 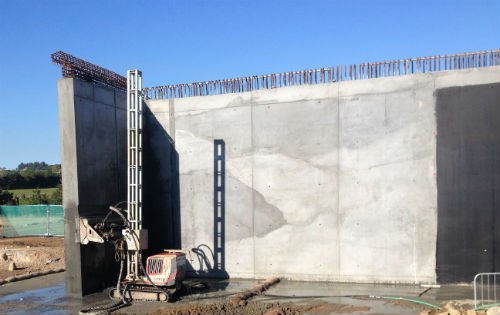 Removal of concrete by Hydrodemolition at the Aberdeen Western Peripheral Route

Corecut operate far beyond the Central Belt, recently taking on Diamond Drilling, Hydrodemolition and Floor Sawing work on the Aberdeen Western Peripheral Route. This new 46 kilometre dual carriageway will be a vital transport link, helping to ease congestion in the area and create the right infrastructure to help the economy in the North East of Scotland.

In addition, our team of specialist contractors have also been tasked with carrying out Diamond Drilling work on the A9 dualling contract, a joint venture with Wills Bros Civil Engineering and John Paul Construction. The £35 million project will upgrade a 7.5km stretch of the A9 between Kincraig and Dalraddy.

Corecut have the skills and experience to deliver on the biggest and most challenging infrastructure projects, delivering this crucial work on time and on budget.

Get a Quote for your Project