£500 million of work is currently under way to make significant changes to the M8 M73 M74 motorway to reduce congestion and improve journey times between Glasgow and Edinburgh in Central Scotland.

The first major structure of the project has been completed and Corecut were an integral part of these works. The new Braehead Rail Bridge, weighing 2,000 tonnes, will carry the Edinburgh to Glasgow rail line over the new M8, which is currently under construction.

The timelapse footage below from Ferrovial Lagan JV shows the newly constructed bridge sliding into position. Corecut were subcontracted by Ferrovial Lagan JV to remove excess concrete from the pile heads upon completion of the piling process. Concrete from eight piles, 2m in diameter x up to 2500mm deep, was removed by our team of specialists using a combination of Diamond Drilling and Hydraulic Bursting. This was the only solution available to remove the concrete safely and efficiently whilst working in a confined space environment on Network Rail property.

Speaking about the improvements, Graeme Reid, Project Sponsor for Transport Scotland, said: “The success of the bridge slide marks a significant milestone as part of the M8 M73 M74 Motorway Improvements Project and is the first tangible improvement to the transport infrastructure.

“The time lapse gives a real sense of the challenges involved in delivering a project of this scale and encourages a greater understanding of civil engineering schemes and the benefits they can bring.”

Corecut Operations Director, Ewan Crocker added, “The works we undertook at this structure were key to the critical path program for the whole job. The Network Rail closure for the bridge installation was booked months in advance so keeping to schedule was essential.” 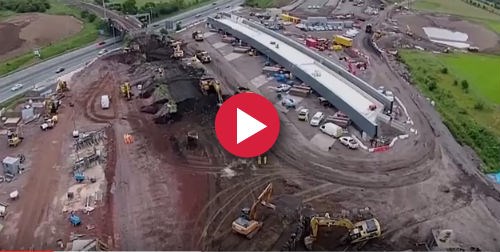