Skip to content
Forth Road Bridge
All Case Studies 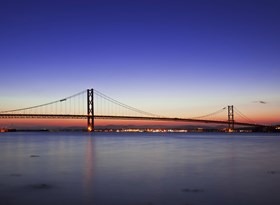 The Forth Road Bridge spans the 2.5 km across the Firth of Forth. The bridge connects Edinburgh, at South Queensferry, with Fife, at North Queensferry. Construction was completed on this Scottish engineering icon in 1964 replacing the ferry service which previously carried passengers and vehicles across the water.

The bridge’s approach viaducts are supported by reinforced concrete piers with steel bearings, allowing the bridge deck to move to compensate for changes in temperature and traffic load. As part of a regular maintenance programme, work began in May 2010 in order to replace the bearings on both approach viaducts. The project involved jacking up the bridge deck to allow the removal and replacement of the existing bearings with the concrete being strengthened at the jacking points with the addition of reinforced concrete corbels on either side of the piers.

Construction on the Forth Road Bridge began in 1958, it took six years to complete and cost £19.5 million

Corecut were subcontracted by Balfour Beatty Civil Engineering, having previously worked with the company on similarly demanding projects. One of the main aspects of Corecut’s work was drilling holes in the existing concrete piers to accommodate the new steel reinforcement bars which would connect the new corbels to the existing structure.

A range of specialist equipment was required for the project and Corecut selected Hilti as their supplier as they offered a comprehensive selection of tools.

Prior to commencement on site, a “mock pier” was built at nearby Rosyth in order to gauge the accuracy of the diamond drilled holes. Using a core bit guide previously developed by Hilti, a tolerance of ±10 mm was achieved whilst drilling horizontally to a depth of 5.5 m, the maximum for the job

Renovation work to the bridge involved around 17,000m of Diamond Drilling to facilitate the placement of steel reinforcement bars for strengthening of the bridge’s foundations

Contracts Supervisor for Corecut on the project, Peter Ferguson said, “Our initial trials were critical to ensure every bar is installed correctly, our operatives are well trained and know exactly what is required.” Every detail of the installation process was thought through even down to keeping the resin at a constant temperature in insulated crates at the workface to ensure easy and cost efficient use.

Hilti’s PS 200 Ferroscan was used in order to map the depth and location of the existing reinforcements in order to determine the best place to drill holes. To help set the location of the holes to be drilled around the pier, A Hilti PR 25 Rotating laser was used. The Hilti DD 200 diamond drilling system was then deployed to core out the 57 mm diameter holes to the specified depths. In total 17,000m of diamond drilling was carried out during the project.

Once the holes were drilled the additional reinforcing bars were installed using Hilti HIT-RE 500 resin. This was distributed using Hilti’s HIT-P8000 pneumatic dispenser and long length of hose with piston plugs, in order to ensure that the resin was installed from the base of each hole. A precise volume of resin is used to ensure the design loads are achieved. Up to five 1400 ml tubes were used on the larger diameter holes and a total of 5,500 litres were on the project overall.

A total of 5,500 litres of Hilti HIT-RE 500 resin were used on the project to install the reinforcing bars.

Alan Brisbane, Project Manager for Balfour Beatty Civil Engineering, complimented Corecut’s contribution to the project, “Finlay Crocker (MD of Corecut) and his team have helped in making an awkward and challenging job run smoothly and it is a pleasure to work with such a professional and conscientious contractor.”