When not running one of the UK's leading diamond drilling, sawing and controlled demolition companies, Finlay Crocker likes to pursue his other passion, motor racing.

Finlay started his racing career as a youngster competing alongside his brother in endurance carting. He then progressed to competing in the Scottish Mini Cooper Cup before heading south to compete in the National Mini Challenge.

In 2012 Finlay joined the VFR Racing team alongside Vic Covey and Ronnie Klos to compete in the keenly contested Renault Clio Cup. The VFR Racing team, which is sponsored by Corecut and prepared by the Scuderia Vittoria outfit are aiming for success in 2013.

Finlay and the VFR team were recently featured in an article in The Scottish Sun Motorsport section. You can read the full article by clicking on the image below. 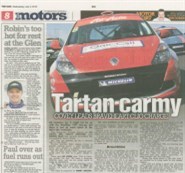