Corecut is delighted to annouce the continued sponsorship of Winchburgh Albion under 15's for the upcoming 2011/12 season. 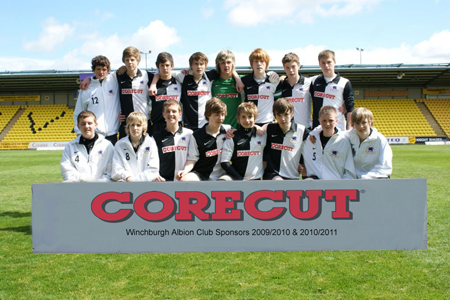 Corecut director Finlay Crocker commented on the agreement "Making the decision to extend the sponsorship of the clubs shirts and training kit was not a difficult one and we are delighted to continue to be associated with Winchburgh Albion. Corecut understand the importance of teamwork when striving for success and getting results. We are pleased with the progress made by the team in the last two years and are proud to play a part. We all wish the team good luck for the forthcoming season."

The Albion's debut season in the A league has been largely a successful campaign with he team reaching the final of the County Cup, eventually ending up as runners up to local rivals Broxburn.

Winchburgh's Manager Darren Haddow added, "Everyone involved in the running of the team are delighted to extend the relationship between the Club and one of the areas most successful businesses Core Cut Ltd."